Both before and after the election results, Trump’s supporters were lambasted as racist, misogynist bigots. But do these insults work? Will shaming change anyone’s mind? If not, how do you convince people to drop their prejudices? As Vox reports: “a frank, brief conversation.”

[A 2016] study, authored by David Broockman at Stanford University and Joshua Kalla at the University of California Berkeley, looked at how simple conversations can help combat anti-transgender attitudes. In the research, people canvassed the homes of more than 500 voters in South Florida. The canvassers, who could be trans or not, asked the voters to simply put themselves in the shoes of trans people — to understand their problems — through a 10-minute, nonconfrontational conversation. The hope was that the brief discussion could lead people to reevaluate their biases.

It worked. The trial found not only that voters’ anti-trans attitudes declined but that they remained lower three months later, showing an enduring result. And those voters’ support for laws that protect trans people from discrimination increased, even when they were presented with counterarguments for such laws.

…In talking with researchers and looking at the studies on this, I found that it is possible to reduce people’s racial anxiety and prejudices. And the canvassing idea was regarded as very promising. But, researchers cautioned, the process of reducing people’s racism will take time and, crucially, empathy.

This is the direct opposite of the kind of culture the internet has fostered — typically focused on calling out racists and shaming them in public. This doesn’t work. And as much as it might seem like a lost cause to understand the perspectives of people who may qualify as racist, understanding where they come from is a needed step to being able to speak to them in a way that will help reduce the racial biases they hold.

It turns out that favorite buzzwords and phrases like “racist,” “white privilege,” and “implicit bias” are often seen by these voters “as coded slurs. These terms don’t signal to them that they’re doing something wrong, but that their supposedly racist attitudes (which they would deny having at all) are a justification for lawmakers and other elites to ignore their problems…What’s more, accusations of racism can cause white Americans to become incredibly defensive — to the point that they might reinforce white supremacy. Robin DiAngelo, who studies race at Westfield State University, described this phenomenon as “white fragility” in a groundbreaking 2011 paper[…]The innate resistance and defensiveness to conversations about bigotry don’t mean that you should never talk about racism, sexism, homophobia, or other kinds of hate. But those conversations may have to be held more tactfully — positioning people into a more receptive position to hear what these problems are all about.”

The entire piece is worth reading.

I want to visit this topic briefly because, while the subject never seems to leave the news, the fundamentals of the subject come up rarely. In keeping with the confusion that reigns regarding many subjects, transgenderism ultimately is not a question of science. Rather, the question lies in philosophy. I would sum up the question this way: What is the really real which defines a person’s identity? More specifically, in a mismatch between the body and the mind, is the body or the mind in error?

For this reason, the scientific facts of transgenderism only make sense in the light of choosing an answer to the above philosophical question. The possession of a penis or a vagina only proves definitive if you have answered the above question with “The physical aspects of our body define our identity.” Conversely, the fact that transgender people often possess a brain structure somewhere in between men and women definitively rules in this case only if you have first answered “The mental defines our identity.”

In other observations, the debate over transgenderism has seemingly brought gender essentialism back to circles from which it was long ago banished, because you cannot be something unless that something has fixed traits. One clever professor and journalist caught onto this trend during Caitlyn Jenner’s transition: 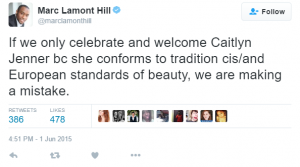 Now, what is my opinion? I identify the real with the physical body. The topic of transgenderism is, so far as I can tell, the only subject where we identify the real with the mind. When a person experiences a phantom limb, we all identify the really real with the fact that they lack a limb, not with their mind which believes the body still has that limb. On the flip side, when people profess a desire to amputate a healthy limb based on their mental image of themselves as an amputee, we do not amputate the limb because, once more, we identify the body as real and the mind as in error. We also show an abhorrence to amputating a healthy limb based on desires. I believe, in all cases except transgenderism, we unanimously identify the real with the body for good reason. Namely, a common human experience is the individual (and sometimes even the collective) mind in error compared what is real. Making the individual mind into the sole arbiter of the real cannot help but lead to conclusions both absurd and damaging.

As a final thought, I do not want to leave this subject without acknowledging that an immense amount of human suffering is bound up in this topic. We’re not just discussing abstract theories of the really real. We’re discussing people’s lives. I try to be sensitive to that fact. I doubt my opinion will change on this subject, but I am always open to people sharing their experiences because, even if no one changes their opinion, I find it helpful to know what people are experiencing.

Does transgenderism conflict with feminism?

Do women and men have different brains?

Back when Lawrence H. Summers was president of Harvard and suggested that they did, the reaction was swift and merciless. Pundits branded him sexist. Faculty members deemed him a troglodyte. Alumni withheld donations.

But when Bruce Jenner said much the same thing in an April interview with Diane Sawyer, he was lionized for his bravery, even for his progressivism.

Transgender MMA fighter Fallon Fox earned her second straight win on Saturday, when she TKO’d Tamikka Brents in the first round at a Capital City Cage Wars event in Springfield, Illinois. Brents reportedly suffered a concussion and a broken orbital bone during the two-minute beatdown, and required seven staples in her head.

I’ve fought a lot of women and have never felt the strength that I felt in a fight as I did that night. I can’t answer whether it’s because she was born a man or not because I’m not a doctor. I can only say, I’ve never felt so overpowered ever in my life and I am an abnormally strong female in my own right.

Does transableism conflict with disability rights?

When he cut off his right arm with a “very sharp power tool,” a man who now calls himself One Hand Jason let everyone believe it was an accident.

But he had for months tried different means of cutting and crushing the limb that never quite felt like his own, training himself on first aid so he wouldn’t bleed to death, even practicing on animal parts sourced from a butcher.

“My goal was to get the job done with no hope of reconstruction or re-attachment, and I wanted some method that I could actually bring myself to do,” he told the body modification website ModBlog.

His goal was to become disabled.

Is transracialism bad for racial progress?

Transracial identity is a concept that allows white people to indulge in blackness as a commodity, without having to actually engage with every facet of what being black entails — discrimination, marginalization, oppression, and so on. It plays into racial stereotypes…