So, just hours after telling everyone to muzzle their crazies because of how some ostensibly pro-life activists have taken to calling a 14-year old girl a “whore” (and so on) because they didn’t like her sign, here’s an interesting story about a woman who showed up at a pro-Zimmerman rally with a sign that read “We’re racist and proud!” An example of a crazy who needs muzzling? Not exactly. 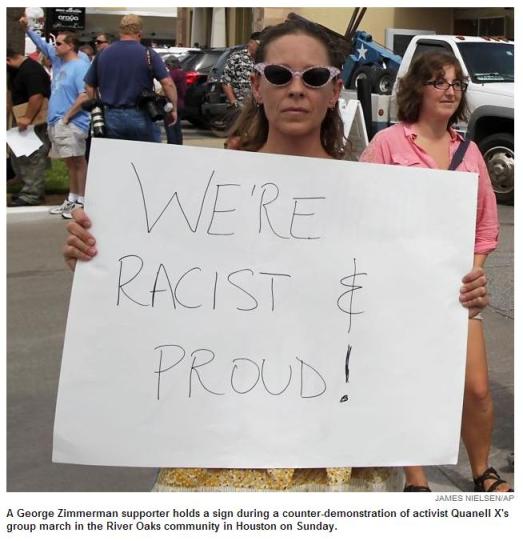 Turns out that she’s actually from a radical left-wing organization. She was interviewed at the rally and asked about her sign, and she said “there are people here who are racist and apparently think that’s OK. I’m not one of them. I’m being sarcastic.” Sarcastic? Or just trying to help “clarify” the racial undertones of the Zimmerman controversy? In either case, it looks like it worked. Check out the caption to the photo above: her sign was taken seriously.

I guess this means there’s a third reason to muzzle your crazies: so that you can more rapidly expose the plants.

Also: I’m depressed about humanity right now. If you have to frame the opposition because they aren’t doing their part to fulfill your stereotype of them, maybe it’s time to reconsider your stereotype? Just a thought.

1 thought on “The Other Kind of Crazies: Frauds”