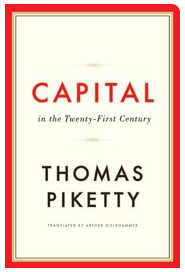 One of the most useful things I learned about economics when getting my master’s was simply who to pay attention to. When I read an article and it references someone whose research was brought up not just once, but again and again in my classes, I know I’m reading about a serious economist. Well, this article1 is written by Bob Solow about a book by Thomas Piketty based on research he conducted with Emmanuel Saez and Anthony B. Atkinson. That’s the most big-name economists I’ve ever seen in a contemporary piece, so even though I had a busy day today I took the time out to read this article.2

I was not disappointed. This is a really important article if you want to understand income inequality. Unfortunately, it’s also rather technical (although it tries not to be). So I’m going to attempt to give the plain English version of the simplified review of a French book on income inequality. Believe it or not, I think some really important core concepts will translate all the way through.3 So here are the take-aways:

You should be able to put points 3, 4, and 5 together to reach this simple conclusion: all developed nations are on track to have more capital, which will make owning capital more lucrative, which will disproportionately favor the rich, which will continue to drive income inequality.

This is pretty important. It’s important because it tells us that income inequality is going to continue to increase towards levels not seen since the late 1800’s.4 It’s also important because it explains why this is happening, and it does so in terms of cross-cultural, international, non-partisan (mostly) terms. It’s not as simple as the Democrats or the Republicans selling you out to corporate America (although that probably doesn’t hurt). It’s driven by fundamentals.

Lastly, it’s important because it suggests a policy solution. Unfortunately, the policy solution is politically impossible. I mean, if you think that consumption tax would be a neat idea but you don’t think it’s realistic, that’s trivial compared to what would be required to combat this trend. Basically: you need to make capital less profitable. And that means you need to tax it. But, in order to be effective, this tax has to be international. Otherwise, if the UK taxed their capital, they would just be shooting themselves in the foot because all their rich folk would invest in French and American capital and legally avoid paying taxes.5 So not only would the EU, US, Japan (and others) all have to agree to an incredibly unpopular tax, they’d also have to figure out how much to tax, how to enforce it, and what to do with the revenue. As Solow (the one doing the review says): Not. Going. To. Happen.

In simple terms, this means y’all should buckle in because we’re in for a bumpy ride. Income inequality foments radicalization and discontent, and so things could very well could ugly and even revolutionary.

First, and obviously, if the forecasted numbers don’t pan out, neither do the results. Significantly change how much a country chooses to invest, or the rate of economic growth, of the long-run return on capital and the model veers off in one direction or another. Second, there is a contention that many wealthy Americans are already “the working rich” who get their compensation in labor rather than wealth. This would appear to contradict a key point (#5), but Piketty addresses that, Solow is convinced by it and so am I. (Although up until reading this article that was actually something I took seriously in my qualms with income inequality arguments.)

I have two unknowns of my own, however, which don’t come up in the model. First, I’d like to know more about the impact of international economic growth. We’re focusing on income inequality among people in the developed world. That’s what we tend to focus on because of what liberals would ordinarily call ethnocentrism.6 While income inequality in that sense of the word is rising, income inequality globally is actually falling, and has been for decades. This is because the poorest countries are getting richer (in aggregate) faster than the richest among the developed world are getting richer than the poor among the developed world. And this advance of the poor countries is not just the mega-rich within those countries. As China has shown (again), you don’t get sustained economic growth without creating a middle class. The rise of the rest (as Fareed Zakaria dubs it) has important economic, ethical, and policy implications.7

But my biggest concern with this whole article is the focus on income taxation. In simple terms, you have to tax capital-based income so that it looks like labor-based income to mitigate the effects of rising income inequality. Not only is this politically infeasible, but it would also very negatively impact economic growth.8 But do we really care so much about income? Or should we care more about consumption? Is it morally problematic that Bill Gates possess billions of dollars, or is it what he gets from those billions (yachts, influence, and safety) that causes the problem of income inequality? It seems, although this is just a first-glance at the issue, that a strong safety net and consumption based taxation goes a long way towards mitigating the problem of income inequality by looking at the problem in a new way.

10 thoughts on “Care About Income Inequality At All? Read This Now.”