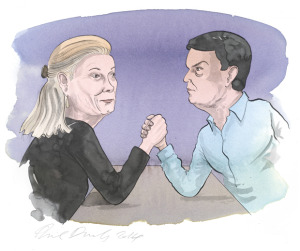 Earlier this year, The Spectator ran a great article contrasting the worldviews of French economist Thomas Piketty and Chicago-style economist Deirdre McCloskey. “Piketty (for those who have not followed the story so far) worries about capital and, in particular, the tendency for those who already have it to get more,” the article proclaims. “…McCloskey, by contrast, has long argued that economists are far too preoccupied by capital and saving…Th[e] jump in incomes [in the 19th century] came about not through thrift, she says, but through a shift to liberal bourgeois values that put an emphasis on the business of innovation. In place of capitalism, she talks of ‘market-tested innovation and supply’ as the active ingredient of our economic system. It is incidentally a system ‘drenched’ in values and ethics overlooked by economists.” And it is this that gets to the heart of the matter: “whether capital — past accumulation of savings — gets to devour the future, or whether the future is created afresh by each generation. This argument is a struggle between those who think riches are created from riches, and those who think riches are created from rags. Are big profits best viewed as a generous return on capital, in the way that worries Piketty? Or as coming from innovation that ultimately benefits us all?”

Well, McCloskey now has a full response to Piketty’s Capital in the Twenty-First Century forthcoming in the Erasmus Journal of Philosophy and Economics and available on her website. The title? “Measured, Unmeasured, Mismeasured, and Unjustified Pessimism: A Review Essay of Thomas Piketty’s Capital in the Twenty-First Century.” From demonstrating Piketty’s misunderstanding of supply and demand curves (“He is in short not qualified to sneer at self-regulated markets…because he has no idea how they work”) to noting the strange obsession with inequality (“…and [apparently] we care ethically only about the Gini coefficient, not the condition of the working class”), McCloskey does a fine job in her 50 pages painting a very different picture of the world. However, my favorite portion has to be the following:

Righteous, if inexpensive, indignation inspired by survivor’s guilt about alleged “victims” of something called “capitalism,” and envious anger at the silly consumption by the rich, do not invariably yield betterment for the poor. Remarks such as “there are still poor people” or “some people have more power than others,” though claiming the moral high-ground for the speaker, are not deep or clever. Repeating them, or nodding wisely at their repetition, or buying Piketty’s book to display on your coffee table, does not make you a good person. You are a good person if you actually help the poor. Open a business. Arrange mortgages that poor people can afford. Invent a new battery. Vote for better schools. Adopt a Pakistani orphan. Volunteer to feed people at Grace Church on Saturday mornings. Argue for a minimum income and against a minimum wage. The offering of faux, counterproductive policies that in their actual effects reduce opportunities for employment, or the making of indignant declarations to your husband after finishing the Sunday New York Times Magazine, does not actually help the poor (pg. 34).

5 thoughts on “McCloskey on Piketty”