I haven’t posted anything about gun control in the middle of this most recent medley of outrage. This is primarily because I haven’t seen anything that looks remotely like a rational debate in which I could participate. It’s also because I’ve written on this topic at great length already1, and there is not a whole lot new to add.

It’s not that I’m opposed to considering new policies to solve the problems of widespread gun ownership.2 Nope, the problem is that I find most of the folks who are calling for greater gun control are suggesting the wrong solutions to the wrong problems.

The degree of irresponsibility this time around has been particularly shocking. The most prominent example of this is the way that the media has adopted a completely baseless definition of “mass shooting” to sensationalize the issue. You’ve probably heard that there have been “more mass shootings than days this year” or something similar. All those articles are using data assembled by the Mass Shooting Tracker website. Their definition is, shall we say, non-standard: it includes any shooting in which at least four people are injured. The FBI definition is more stringent: a shooting in which there are at least 4 fatalities. The database maintained by Mark Follman and Mother Jones3 is even more narrow: it excludes attacks related to gang violence or domestic violence. Follman explains this logic in a piece for the New York Times4:

While all the victims are important, conflating those many other crimes with indiscriminate slaughter in public venues obscures our understanding of this complicated and growing problem. Everyone is desperate to know why these attacks happen and how we might stop them—and we can’t know, unless we collect and focus on useful data that filter out the noise.

German Lopez of Vox (which uses the Mass Shooting Tracker data) thinks Follman is being silly for caring so much about specific definitions: “this entire debate is ridiculous. A shooting is a shooting.” But of course, if that were true, Lopez would have to deal with the fact that gun deaths in America are in a steep decline. According to the Pew Research Center5, “Compared with 1993, the peak of U.S. gun homicides, the firearm homicide rate was 49% lower in 2010, and there were fewer deaths, even though the nation’s population grew.” I’m not saying the current level is acceptable, I’m just saying that  there is no possible way for a person to simultaneously believe “a shooting is a shooting” and also believe that we’re in some kind of unprecedented crisis. Follman has a point: mass shootings (narrowly defined) are on the rise. Lopez—and anyone else jumping on the Mass Shooting Tracker bandwagon—has nothing but hand-waving and posturing. 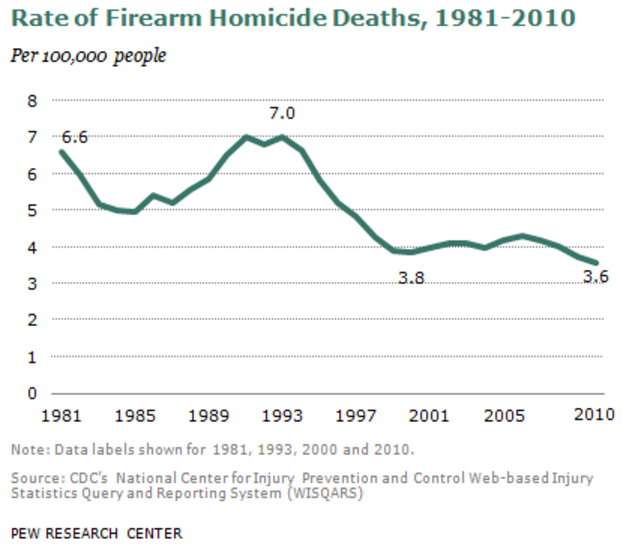 So, if gun violence is actually at historical lows and on the decline, why are gun control advocates convinced that we’re facing some kind of massive epidemic? After all, the New York Times ran a front-page editorial for the first time in almost 100 years to support gun-control. What explains such an extreme reaction?

Missing white woman syndrome is a phrase used by social scientists and media commentators to describe the extensive media coverage, especially in television, of missing person cases involving young, white, upper-middle-class women or girls. The phenomenon is defined as the media’s undue focus on upper-middle-class white women who disappear, with the disproportionate degree of coverage they receive being compared to cases of missing women of other ethnicities and social classes, or with missing males of all social classes and ethnicities.

Although missing white woman syndrome is primarily about kidnapping cases, “it is sometimes used to describe the disparity in news coverage of other violent crimes.”

So, to be perfectly plain about it, mass shootings are sensational because the victims are often white, often middle or upper-class, suburban and–relative to homicide rates in general–female.6 Crime might be down overall, but who cares? If college students and suburban white kids can be killed, then we have a crisis.

It’s not just the perception of the problem that is skewed by race and class, but also the proposed solutions. You see, there are policies that have been tried and found to be effective in combating urban violence. But no one seems to know or care about such initiatives, leading The New Republic to run an article to explain “why no one in Washington—not even President Obama—will embrace a program that could actually reduce gun violence.” Lois Beckett points out that “America’s high rate of gun murders isn’t caused by events like Sandy Hook or the shootings this fall at a community college in Oregon. It’s fueled by a relentless drumbeat of deaths of black men.” He then went on to talk about a program called Ceasefire. It isn’t new and it isn’t sexy, but “in Boston, the city that developed Ceasefire, the average monthly number of youth homicides dropped by 63 percent in the two years after it was launched.” The US Department of Justice has officially labeled it “effective.”

If “a shooting is a shooting”, and if the highest rates of crime are in inner cities, and if the disproportionate rate of murder victims are black Americans, and if we have a proven program to reduce those crimes… why isn’t anyone talking about them? 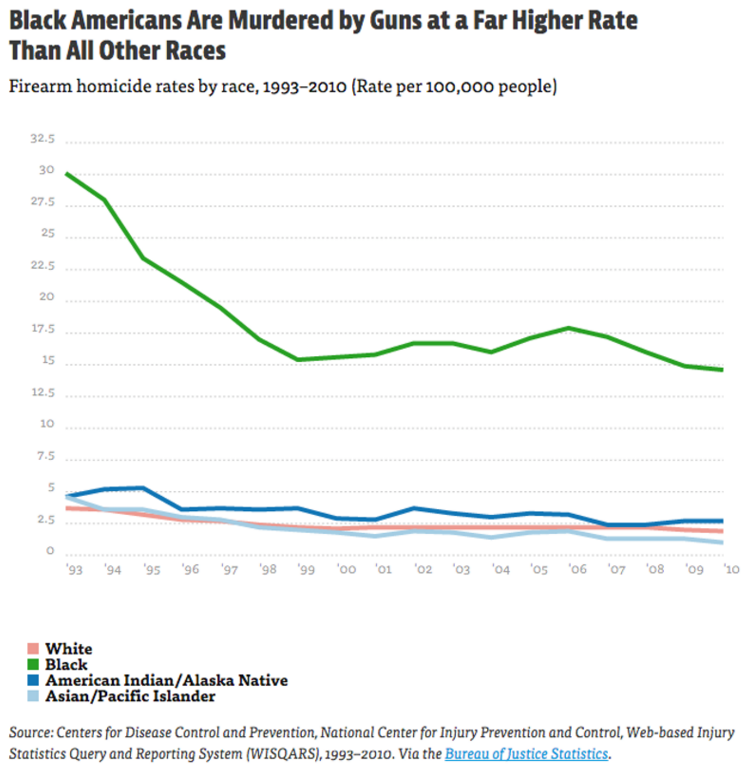 I think that people in those communities are perceived as not sufficiently important because they don’t vote, they don’t have economic power. I think there’s some racism involved. I don’t think we care about African-American lives as much as we care about white lives.

So the problem is misdiagnosed, and the most promising solutions are ignored. But it gets worse than that. The reality is that the proposed “common sense” gun regulations will have basically no impact on mass shootings whatsoever. For example, Marco Rubio recently stated that “None of the major shootings that have occurred in this country over the last few months or years that have outraged us, would gun laws have prevented them.” The Washington Post fact-checked his claim7 and ended up giving out “a rare Geppetto Checkmark.”8

The idea of “common sense” gun regulation coming to the rescue is a politically convenient fiction. It is designed to appeal to moderate voters, but it’s just an empty slogan. The only kinds of gun laws that would have any kind of impact would have to involve a massive reduction in the number of firearms currently in circulation with a forced buyback and stric enforcement. But those laws are guaranteed to be enforced in unequal ways, a point that Ross Douthat made on Sunday:

I suspect liberals imagine, at some level, that a Prohibition-style campaign against guns would mostly involve busting up gun shows and disarming Robert Dear-like trailer-park loners. But in practice it would probably look more like Michael Bloomberg’s controversial stop-and-frisk policy, with a counterterrorism component that ended up heavily targeting Muslim Americans. In areas where gun ownership is high but crime rates low, like Bernie Sanders’ Vermont, authorities would mostly turn a blind eye to illegal guns, while poor and minority communities bore the brunt of raids and fines and jail terms.

If that sounds at all farfetched you simply need to ask yourself this question: has the War on Drugs had a disproportionate impact on poor and minority communities? Then what makes you think a War on Guns would be any different?

Nor is this hypothetical. The history of gun control is a primarily racist history in which gun control was used as a pretext to disarm African Americans to make them easier targets. The Atlantic covered this thoroughly in an article called The Secret History of Guns, noting that “no group has more fiercely advocated the right to bear loaded weapons in public than the Black Panthers—the true pioneers of the modern pro-gun movement.”

And let me just end with a note about how spectacularly bad some of the proposed new “common sense” regulations are. In his address to the nation, President Obama doubled down on the idea of using the terrorist watch list to screen gun purchases. This sounds entirely reasonable for about a second or two. After that, however, you might remember that—before it was brought up in this context—the terrorist watch list showed up in the news only in story after story of how horrifically mismanaged and unfair it was. This is the same terrorist watchlist that contained 72 Department of Homeland Security employees, a finding that led the DHS director to resign. Even ThinkProgress9 thinks it’s a terrible idea. Aviva Shen quoted Marco Rubio in The Problem With Banning Guns From People On The Terrorist Watch List:

It’s not just a matter of plain bureaucratic incompetence, however. Ken White pointed out the philosophical problems with the idea for Popehat:

Last night the President of the United States — the President of the United States — suggested that people should be deprived of Second Amendment rights if the government, using secret criteria, in a secret process using secret facts, puts them onto a list that is almost entirely free of due process or judicial review. Because we’re afraid, because they could be dangerous was his only justification; he didn’t engage the due process issue at all.

Do I even need to point out that this list is also guaranteed to skew along ethnic and religious lines? The exact same folks who are horrified by Donald Trump’s bigotry10 don’t seem to realize that a proposal like adding the terrorist watchlist to the background check is basically a backdoor method of accomplishing the same kind of religiously-based stripping of civil liberties from American citizens.

To recap: gun violence is ignored when it effects primarily young black men, but when it happens in suburban schools or movie theaters it is a crisis that demands swift and thorough response. Anti-violence programs with a proven record of lowering gun crime where it is worst—in inner cities—and thereby saving the lives of young black men are also ignored. Instead, we hear about “common sense” gun regulations that sound reassuring but would help no one and end up (you guessed it) further compounding the systematic inequalities in our society that target the poor and minorities.

The left is very, very good at sniffing out the faintest whiff of white privilege from the right, but—when it comes to handling the gun issue—it’s time to say: physician, heal thyself.