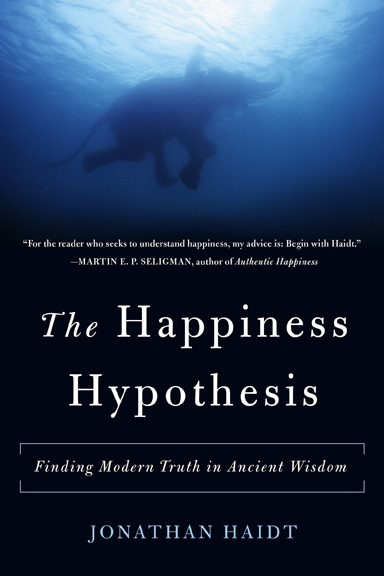 Richard Davidson, the psychologist who brought us affective style and the approach circuits of the front left cortex, writes about two types of positive affect. The first he calls “pre-goal attainment positive affect,” which is the pleasurable feeling you get as you make progress toward a goal. The second is called “post-goal attainment positive affect,” which Davidson says arises once you have achieved something you want. You experience this latter feeling as contentment, as a short-lived feeling of release when the left prefrontal cortex reduces its activity after a goal has been achieved. In other words, when it comes to goal pursuit, it really is the journey that counts, not the destination. Set for yourself any goal you want. Most of the pleasure will be had along the way, with every step that takes you closer. Th e final moment of success is often no more thrilling than the relief of taking off a heavy backpack at the end of a long hike. If you went on the hike only to feel that pleasure, you are a fool. People sometimes do just this. They work hard at a task and expect some special euphoria at the end. But when they achieve success and find only moderate and short-lived pleasure, they ask (as the singer Peggy Lee once did): Is that all there is? They devalue their accomplishments as a striving after wind. We can call this “the progress principle”: Pleasure comes more from making progress toward goals than from achieving them. Shakespeare captured it perfectly: “Things won are done; joy’s soul lies in the doing” (pgs. 83-84).

I was reminded of this while reading John H. Vandenberg’s October 1972 talk. In it he explains that the Church “extends the invitation to all who so desire to partake of the power of the gospel, which will lift an individual out of oblivion and, in so doing, will give a feeling of satisfaction and happiness not to be found elsewhere. It provides the sources of control for self-improvement, a stable character, and a truly successful life.” In Vandenberg’s eyes, the gospel is about–to borrow Haidt’s term–progress: “It is highly doubtful that there is even one soul upon the earth, regardless of station or age, who does not have ample room for personal growth and improvement. Quoting the words of one of the Lord’s prophets: “If we are no better tomorrow than we are today, we are not very useful.” (David O. McKay, Pathways to Happiness [Bookcraft, 1957], p. 292.)” This fits with Joseph Smith’s original vision of the divine:

Being versus Becoming, Process versus Perfection, Creation, Time, and Eternity…The Great Chain of Being–unchallenged paradigm of a static, orderly, and harmonious universe–was buried beneath the emergent model of chaos, flux, radical transformation, and conflict…If there was one prevailing sense in which Joseph Smith was a child of his age, it was in the avidity with which he reflected this dynamic, fundamentally Romantic view of the world, an orientation that suffused his cosmology, his human anthropology, and even his doctrine of deity.1

For Vandenberg, the concept of repentance is “the very essence of change; it embodies the powerful principle of obedience to God’s law and discipline of self. When applied to our lives, it provides a cleansing joy which surges through us.” This doesn’t say, “And when you finally get to the end, you’ll feel joy.” But the constant state of improvement–of “small wins“–brings happiness:

In these principles we find the unfailing power to change. As to the effective use of our leisure time, we have, in the gospel, unnumbered opportunities. As one acquires knowledge of the gospel principles and pursues his course, he can successfully apply those principles to his individual circumstances, whether his position be one of great or meager possessions; whether it be early in life, during his economic production period, or in retirement. The gospel is meant to temper life and to bring it into true balance and fruition…The individual power is attested to in this scripture: “Verily I say, men should be anxiously engaged in a good cause, and do many things of their own free will, and bring to pass much righteousness; For the power is in them, wherein they are agents unto themselves. And inasmuch as men do good they shall in nowise lose their reward.” (D&C 58:27–28.)

Mormons need to remember that it’s about the journey: not the achievement of some static perfection.