After the sniper in Dallas killed five police officers, I saw several posts like this: 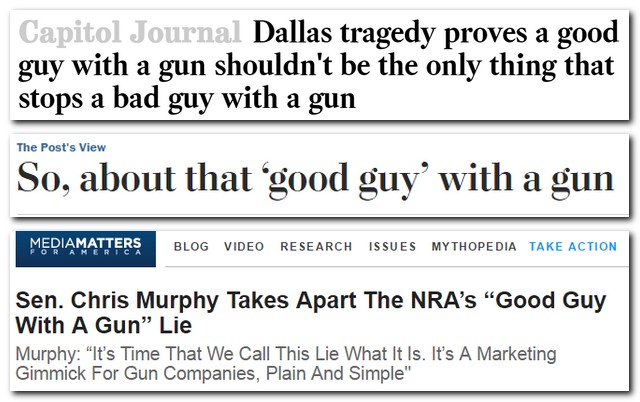 The idea is that there were not only armed police officers present but also citizens with open carry licenses, and yet all these “good guys with guns” didn’t stop the bad guy with a gun from killing people.1 That much is true. The people pointing this out then often conclude that good guys with guns won’t protect us. That much is false.

I think most people on both sides of the gun control debate recognize this to some extent, because almost everyone agrees the police (“good guys with guns”) should be armed. In fact, using Dallas to claim good guys with guns don’t protect us is especially interesting because both civilians and LEOs with guns weren’t able to stop the sniper. Yet gun control advocates are pointing to Dallas as a reason to disarm civlians only, not the police.

And, I mean, I agree that we definitely shouldn’t disarm the police. It seems clear to me that (1) a military-trained sniper is not representative of the dangerous people police are more typically up against, and (2) everyone would have been worse off if the police hadn’t had guns.2

It’s true that civilians and LEOs with guns were unable to stop the sniper before he hurt anyone, but it’s false to suggest the guns were irrelevant or of no benefit, and it’s nonsensical to suggest that if good guys can’t protect people from a military-trained sniper, they can’t protect people in more typical situations. For example, just yesterday (also in Dallas incidentally), a legal gun owner with a pistol stopped a robber with an AK-47.

There are snippet self-defense stories like that regularly, but they don’t make nearly the media ripples that shootings make. I think that’s understandable to some extent: stories about things going right generally don’t get as much attention as stories about things going wrong, especially when things go really wrong. And there’s a matter of degree here too: in terms of media exposure, a snippet about a civilian stopping a robber might be parallel to a snippet about a robber shooting and wounding a single person. They’re both relatively minor stories. But what would the “good guy” equivalent be to stories about horrific mass shootings? Because a story about preventing a mass shooting doesn’t have nearly the media impact mass shootings have. But I digress.

Gun control advocates point out that if the sniper hadn’t had a gun, he couldn’t have done the damage he did. And I think they’re right. I think it’s obvious. I don’t find compelling the gun rights arguments that imply people can be just as dangerous with knives or baseball bats or whatever as they are with guns.

But while I also wish the sniper hadn’t had a gun, it’s not clear to me what the solution is, for two main reasons. (1) Gun ownership is a Constitutional right, so, absent amending the Constitution, gun control measures can’t undermine that right. (2) The measures would have to effectively stop people from obtaining guns illegally, at least at a level that would make up for stopping “good guys with guns” from being able to protect themselves and others from “bad guys with guns.”

I’m open to the possibility that there are gun control measures that can accomplish both of these feats, it’s just not clear to me right now what those measures would be. I think I’ll save that topic for future posts.

2 thoughts on “Does Dallas prove “good guys with guns” is a lie?”